Today we visit Milford Sound.Let’s get the pedantry out of the way. Milford Sound is not actually a sound (a flooded river estuary) it is a fiord (a flooded glacial cut). When it was named though, the word fiord hadn’t yet been imported from Norway into the UK so sailors called any haven between mountains a Sound. So a Sound it is. In order to cover their embarrassment the canny NZ burghers have named this vast section of south-west NZ (which has a landscape resembling Norway) Fiordland – a good name. Only one fiord (Milford) is accessible from inland by road, all the others are only accessible by track or from the Tasman Sea. 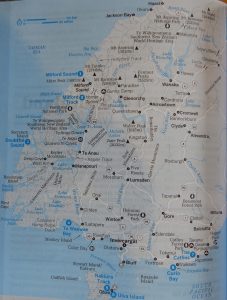 They are all very spectacular. In fact the whole area is very spectacular. The two tectonic plates (you will remember those from an earlier lesson, the Pacific Plate and the Indian / Australian Plate) are wrestling with each other in all sorts of ways and probably pushed the islands of NZ up from the sea floor in the first place. Like the African and the European plates they have created a crash zone of high mountains (these being called the Southern Alps), which are steep and pointy.

In the last ice age (before my time, you understand), the Antarctic ice sheets extended to cover nearly all of South Island and their grinding and gouging actions created a series of magical, deep valleys that extend well below sea level. Now the average annual rainfall in this corner of NZ is between 7 and 9 metres (not mm, metres) so these valleys are now filled with lakes, some hundreds of metres deep – great places to dispose of a body! As we drive alongside them they are grand, austere and, set against the high mountains, breathtakingly beautiful. That’s enough geology for the time being.

Milton Sound is 300 km from our current home in Queenstown. David is fed up with driving so we take a bus. We are sad to discover that our Hampshire senior’s bus passes don’t cover this part of the world so we have to pay. A lot. But it is good to have Chris, our handsome bearded coach driver, dressed in the NZ uniform of shorts, short sleeved shirt, and shoes and socks, to do the heavy lifting. We arise early, breakfast swiftly and stand in the dawn awaiting the taxi that will take us to the bus station. We have brought heavy duty waterproofs with us from the UK which have travelled all over NZ at the bottom of our suit cases. In anticipation of another metre of so of rainfall they are deployed to our rucksacks, where they remain, for it is to be another dry, warm and sunny day, but it feels good to be prepared.

Given the popularity of Milford Sound as a tourist attraction, you’d think there would be a decent straight road there. Not so. Our coach journey takes us at first south along the side of our home lake, Lake Wakatipu, which is shaped like a zig zag with Queenstown at its Zig. This covers the first 100km to Kingston. We then turn west for another 80km to Lake Te Anau, the largest lake in South Island and a good coffee stop. The little township of Te Anau is dedicated to the NZ outdoor pass-times of mountain-biking, fishing, boating and tramping (as well as coach loads of tourists desperate for a pee). From here we turn north again and then west for another 120km of soaring mountain peaks, U-shaped valleys, tumbling glacial streams, mirror-like lakes and a long tunnel get us to Milford Sound. It is three sides of a rectangle to drive here and in all it takes Chris 4 hours of skilful driving and what sounds like a tank-full of fuel for his high-revving coach engine. His droll commentary en-route keeps us informed and entertained. 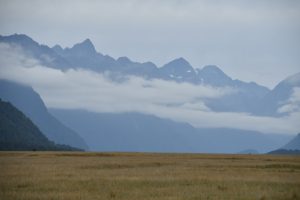 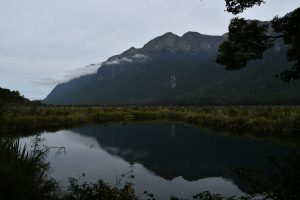 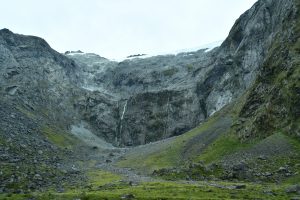 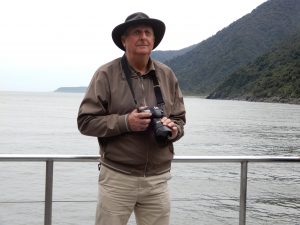 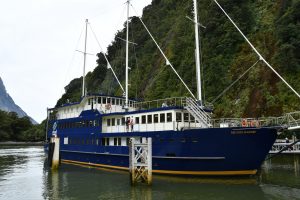 Milford Sound is but 18km long, and to view it we must board a small ship. No rain today so we perch on the highest deck, cameras at the ready, for we don’t want to be caught with our Nikons down. We chug gently down one side of this 3km wide channel to the Tasman Sea. And gently back up the other side. There are vertiginous peaks which rise 2,200m straight from the sea floor, and grand waterfalls of snow-melt which tumble 150m to the sea. Our captain provides an amusing running commentary and takes a delight in nosing his craft right under the waterfall so that his passengers can justify bringing their waterproofs. If you fell into the water here, (450m deep) apart from it being rather cold, there are no hand-holds or rocks to grab. It would be curtains for certain. 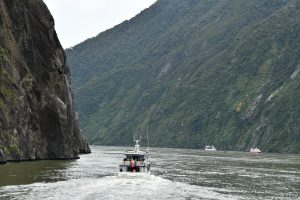 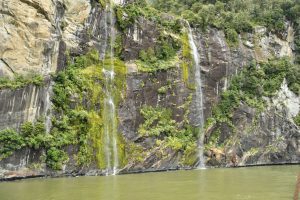 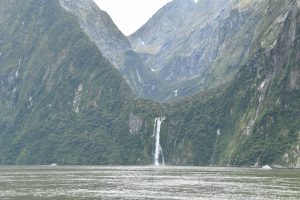 It is a calm, warm day today. We are told that the wind commonly whistles in from the west at 120km/hr (a pretty stiff breeze) and that hats must be hung onto. Today the Tasman Sea is tame and provides a gentle bobbing swell – caused by the bar of glacial moraine (rocks) at the mouth of the Sound which brings the sea floor up considerably. 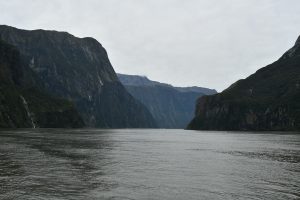 Looking up the Sound

Our sea voyage lasts just 2.5 hours and we are back to the jetty at the head of the Sound. We are offered the option of flying back (there is a small air-strip) or a helicopter ride taking in the summits of the highest snow-covered peaks, but we gracefully decline. How much?
We are faced with another 4 hour coach ride back to Queenstown, this time as fast as is practicable with but one stop. Home by 8:30. We have travelled 600 km to see Milford Sound but it was worth it. Dinner and early to bed.