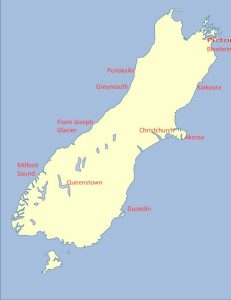 Christchurch is probably the most English of NZ’s cities. Its centre is neat, its public buildings are generous and exude civic pride, its parks are reminiscent of central London’s parks – generously set out and lined with deciduous trees (for we have seen an awful lot of conifers lately), and with plenty of open spaces. We walk past a couple of schools (now in full swing) and observe the children, like those of Australia, neatly attired in properly fitting uniforms of which they seem proud, behaving sensibly. There are no graffiti visible. Oh! where did we go so wrong in the UK? Ever since the perfectly sensible recommendations of the Plowden report, the Left staged a coup d’etat on the organisation of schooling (I won’t equate that with education), and things have gone steadily down hill. OK that’s enough boring old f…t stuff (Ed). Anyway we like what we see.

Sadly, the main reason people come to Christchurch these days is to view the scars of the devastating two earthquakes that so severely damaged its Central Business District in 2010 and 2011. As we wander around, the place is a hive of building activity. Roads are closed, but are being re-equipped with the stuff that goes underground – electricity, gas, water, telecoms. The rubble of fallen buildings has long been cleared away and that entrepreneurial feature of managed car-parking spaces has taken over the voids that are huge areas of the city. Its an ill wind as they say. 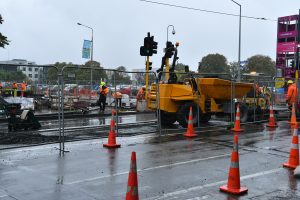 Plenty of work for builders 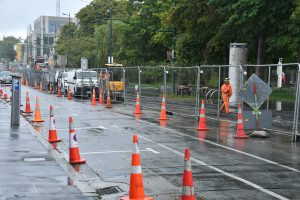 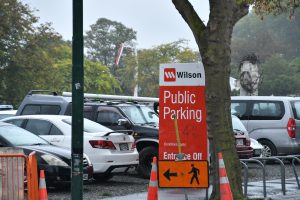 The most severe casualty is the city’s grand Gothic cathedral which fell to pieces and which no-one has yet decided how to (or if to) rebuild. Several other, largely stone block, buildings are shored up pending decisions as to their fate. We don’t get any impression of sorrow. That’s all over. There is a huge “Let’s get on and rebuild it” spirit. 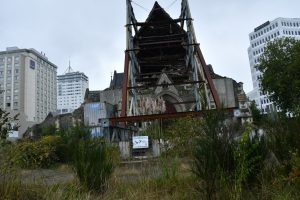 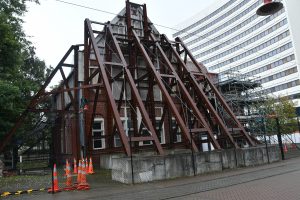 Christchurch boasts a very fine museum. Its Maori early history is elegantly depicted in grand tableaux with lots of artefacts dedicated to killing things. Mr. Maori was keen on the ostrich sized Moa-on-toast for his breakfast so these grand flightless birds all got eaten up and are no more. Clearly Mr. Maori hadn’t been on one of the BBC’s eco-system courses. History has a habit of repeating itself. NZ’s other flightless bird, the Kiwi, is under severe threat since the European settlers introduced rabbits (so they could eat rabbit pie). With no natural predators, the rabbits bred like…..rabbits and became a numerous nuisance. Our very clever European settlers then introduced Mustelids (that’s ferrets, stoats and weasels) to eat the rabbits. You guessed it. Mr Mustelid found excavating rabbit holes tedious, but nice eggs from ground-nesting flightless Kiwis, now there’s a treat. So the poor Kiwi is under threat. We have seen on our travels dozens of “rat trap” sized traps along farm fences and by likely kiwi habitats in an attempt to keep these marauders under control, but they breed like….stoats too. None in Christchurch though. 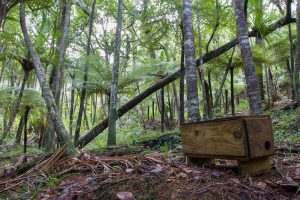 I mentioned that Christchurch is very English, well so is its weather. Seduced by sunshine and fluffy clouds we ventured out in our tourist togs and at the furthest point from our hotel it began to seriously rain. There was nothing for it but to get soaked. So we retreated to our hotel to dry out. We are greeted by smiling staff with an armful of official looking envelopes. Today is NZ census day, so Sue spends an amusing half hour informing some factotum that we were 1) Alive, 2) British 3) Our location for the night. We were spared the 45 questions for the locals on Maori tribe, schooling, income and so on. It is interesting to ponder that but for officialdom’s obsession with counting people, our Lord might have been born in the comfort of his parents’ home. What would that do for the school Nativity play? There was an intriguing notice on the inside of our room door. 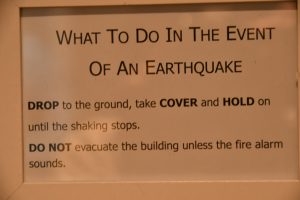 That’s all for today.
Tomorrow, all being well, we are in the air from 1200 hours, en-route to Auckland (1.5 hours), then to Hong Kong (10.5 hours), a short pause in Hong Kong (3.5 hours), then to London (12 hours). We will not know what day it is let alone what time it is.
I will publish the last chapter of this blog with our reflections of our NZ trip on our return. I hope you have enjoyed reading it. I have enjoyed creating it.
David R

One thought on “Around Christchurch, Tuesday 6th March, 2018”